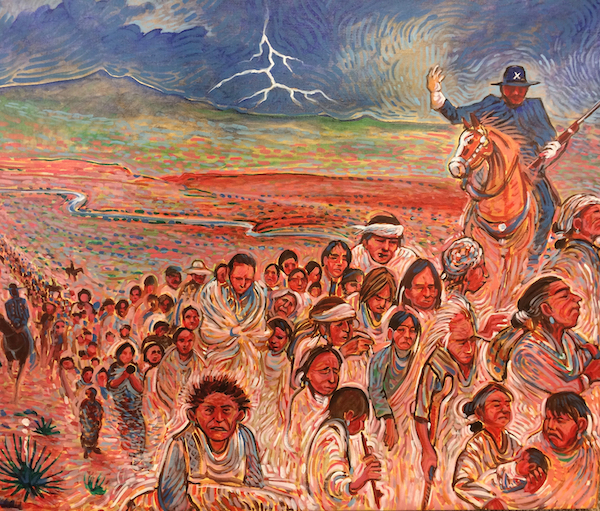 Against the political and historical backdrop of the American Civil War, a conflict focused mainly in the east, another tragic series of events was unfolding for Native Americans in the western territories of Arizona and New Mexico. From 1863 to 1868, Fort Sumner, New Mexico was the center of a million-acre parcel known as the Bosque Redondo Indian Reservation. The history of how the U.S. Army used scorched earth policies to forcibly remove Diné (Navajo) and Ndé (Mescalero Apache) people from their traditional homelands to this lonely, inhospitable outpost along the Pecos River is pivotal to the history of the American West. The Diné call this the Long Walk, when over 50 different groups made the 300+ mile journey over a period of nearly three years. Several hundred Diné captives either died during the walk or were abducted by slave traders. Gross acts of brutality included stragglers being shot and pregnant women killed if they could not keep up with the group. For the Ndé, a historically migratory people who hunted and gathered freely in the mountains of the southwest, being rounded up, made sedentary on a single piece of land, and forced to ‘farm’ was in and of itself a form of cultural genocide. Confining members of these two completely disparate cultures together and pitting them against each other was another form of cruelty inflicted upon the prisoners.

During their internment, the Diné and Ndé were prevented from practicing ceremonies, singing songs, or praying in their own language. Daily depredations at the reservation were palpable on every level. Food rationing was both meager and completely foreign (coffee beans, white flour and rank beef), while the lack of wood for heating and cooking during the bitterly cold winters led to illness, and high infant mortality. When a smallpox-like disease was contracted from the military, it ravaged the captives. The suffering from exposure, starvation, and sickness took an estimated 1500 lives. In 1865 close to 350 Mescalero made their escape and returned to their sacred Sacramento Mountains. Nearly 1,000 Navajos also fled but more than 7,000 remained.

This dark chapter in our national history finally came to an end in 1868 with the signing of a treaty and the return of Diné survivors to their traditional homelands. While the treaty acknowledged the sovereignty of the Navajo Nation, it also outlined the oppressive conditions under which they would be bound, and forever changed the way they would live. As well, the Ndé had a similar experience after they signed a treaty in 1873. The pedagogy of oppression employed throughout the US policies has reshaped their cultures on every level: mentally, politically, and spiritually.

In 2005, the New Mexico State Monuments Division (now Historic Sites) and the Museum of New Mexico Foundation, with strong support from the Diné and Ndé, created the Bosque Redondo Memorial. It stands today to acknowledge the events of the 1860s and to allow those affected by the history to have a voice to tell their history. Designed by Navajo architect David Sloan in the shape of a hogan and a tepee, the museum and an interpretive trail provide an exhibit and educational programs to all who seek it.

The nature trail and walking path is supported by a complimentary QR code-based audio tour.

Hours and Days of Operation:

Thursday through Sunday, 10 a.m. to 4 p.m.; closed Monday through Wednesday

$7 for adults. Free for children 16 years and younger. NM residents with ID admitted free the first Sunday of every month.