🛈 Temporary COVID-19 Closure:
In accordance with revised public health directives, the New Mexico Department of Cultural Affairs (DCA) has closed its museums and historic sites to the public until further notice. The safety and well-being of our employees and visitors is the DCA's foremost concern. We appreciate your ongoing support and understanding. Please continue to visit this website for updates and to explore virtual visits, programs, and educational opportunities. 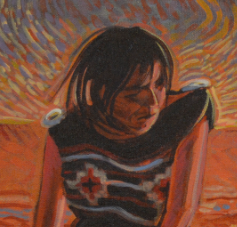 "Our nation was born in genocide when it embraced the doctrine that the original American, the Indian, was an inferior race….Our children are still taught to respect the violence which reduced a red-skinned people of an earlier culture into a few fragmented groups herded into impoverished reservations.” Dr. Martin Luther King Jr.

On March 12, 1864, when writing of the defeat of the Navajo by Colonel Kit Carson, Brigadier General James Carleton wrote, “…But, when at length they (Navajo) found it was their destiny, to give way to the insatiable progress of our race, they threw down their arms…”  The internment of Navajo and Mescalero Apache people occurred at Fort Sumner, but the history didn't begin or end there.  The story of Bosque Redondo began when the Europeans colonized lands in "New World" and felt justified to eliminate through war and disease the Native people.  The westward expansion of America included removing people from their homelands, war against those people and the assimilation through boarding schools.  The population of the America prior to colonization is unknown but range from 1.8 to 18 million people.  We know today that they make up only 1% of American population.

The legacy of colonialism lives with us today.  Many examples are around us from Civil War statues to caricatures of Native peoples through advertising and naming of sports teams.  How do we move forward as one nation under god, indivisible, with liberty and justice for all in a nation with a colonial past and a currently diverse population?

Mark Charles, a Navajo activist and lecturer, often quotes George Erasmus, Aboriginal Leader in Canada, who said, "Where common memory is lacking, where people don't share in the same past, there can be no real community. Where community is to be formed, common memory must be created."  In America (many other countries with similar past as well) we have two memories - white European legacy of westward expansion, Manifest Destiny, and racial exceptionalism, and collective memories of Native and African Americans of stolen lands, physical and cultural genocide, broken treaties, boarding schools, slavery, segregation, Jim Crow laws and discrimination.

Below are interactive exhibits related to the colonialism in America through an Indigenous lens, that invite YOU to read about and share your experiences as they pertain.  Click on the link below and enter the conversation.